The Robot scenario is a rapid design demonstration scenario on the use of Anomaly Monitoring and Monitor Dashboards in Maximo Asset Monitor.

The scenario outlines a fictitious manufacturing company ACME with 4 production sites in the US. The sites are located in Alphaville, Betacamp, Charlyton and Deltalake. The production assembly lines at the sites have robots instrumented with sensors connected to the IoT Platform cloud service running as part of the ACME Maximo Asset Monitor tenant. The robots report data metrics from the robot arm on torque, load, speed, and acceleration at 5- minute intervals.

Over the last few days, one of the robots in Alphaville has been anomalous data values on robot arm torque. Also, the speed and acceleration of the robot arm seem to be impacted. The alerts from the robot are notified to the operator at the ACME remote operations team. Bryan the operator will start a root-cause investigation and troubleshoot the abnormal values. Once he has validated the alert he will create a service request for the maintenance engineering team in Alphaville to resolve the issue before the robot breaks and causes a halt to the production line.

The robots in this scenario are simulated on the IBM cloud using a NodeRed flow. The simulator sends robot data events every 5 minutes as MQTT messages to the Watson IoT Platform service included and preconfigured in Maximo Asset Monitor. The event contains robot data for load, torque, speed, and acceleration using the following MQTT event message schema in JSON format.

The simulated data is mainly random values within a set range for each metric. To simulate anomalies, random data spike values are added to the torque data to show reoccurring abnormal data indicating a possible root cause of a future robot failure. 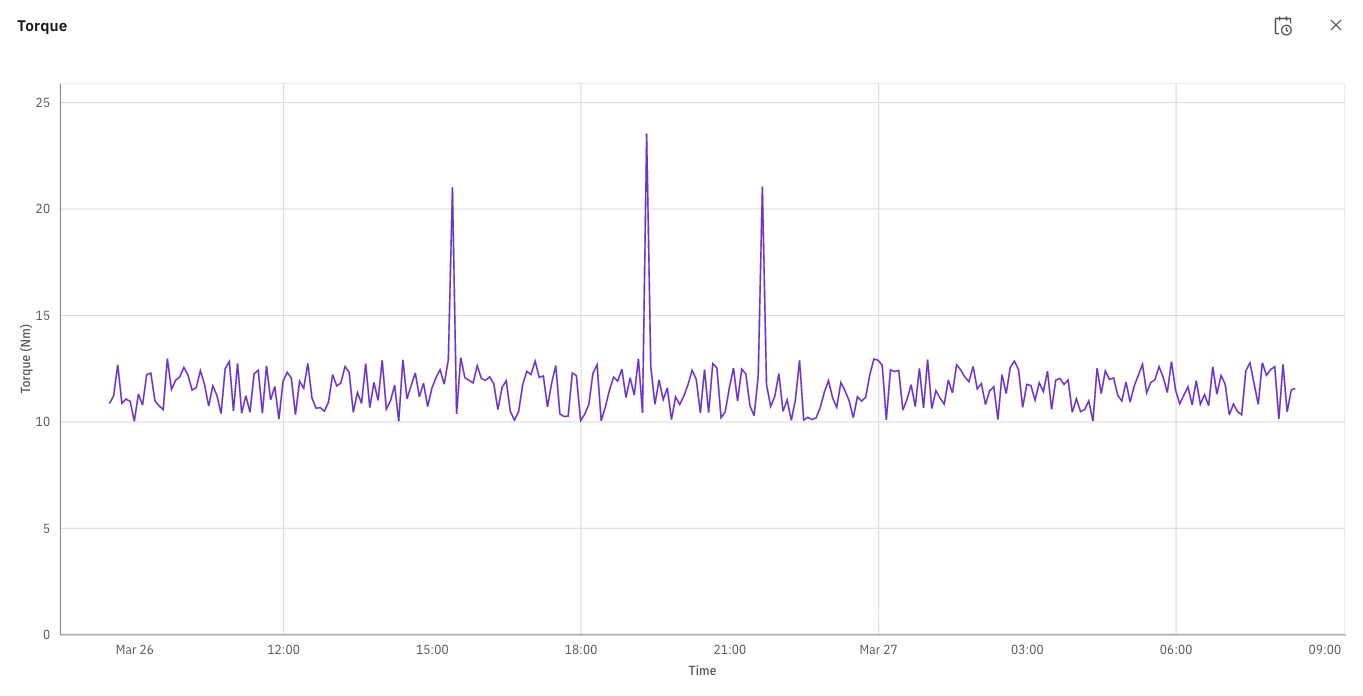 All ACME Robots in this scenario is of the same type and send the same torque, load, speed, and acceleration sensor data. The robots are monitored as an ACME_Robot entity type with torque, load, speed, and acc metrics. Maximo Asset Monitor provides an out-of-the-box catalog of anomaly model functions that can be configured with data metrics as inputs. The model computes an anomaly model score. The score is a likelihood of anomalous data within a time window of data samples. The anomaly function scans the time-series torque data and produces a time graph of anomaly scores. Maximo Asset Monitor provides a predefined set of anomaly models. In the robot scenario demonstrator, we are using a saliency-based generalized anomaly scoring model. The model employs Saliency and GAM on windowed time series data to compute an anomaly score from the covariance matrix. An alert function in Maximo Asset Monitor can be configured with the anomaly model score as a parameter to compare with a set threshold. If the score is above the threshold an anomaly is detected and an alert is created. In this scenario, the torque anomaly alerts are set to trigger alerts at a threshold of 100. 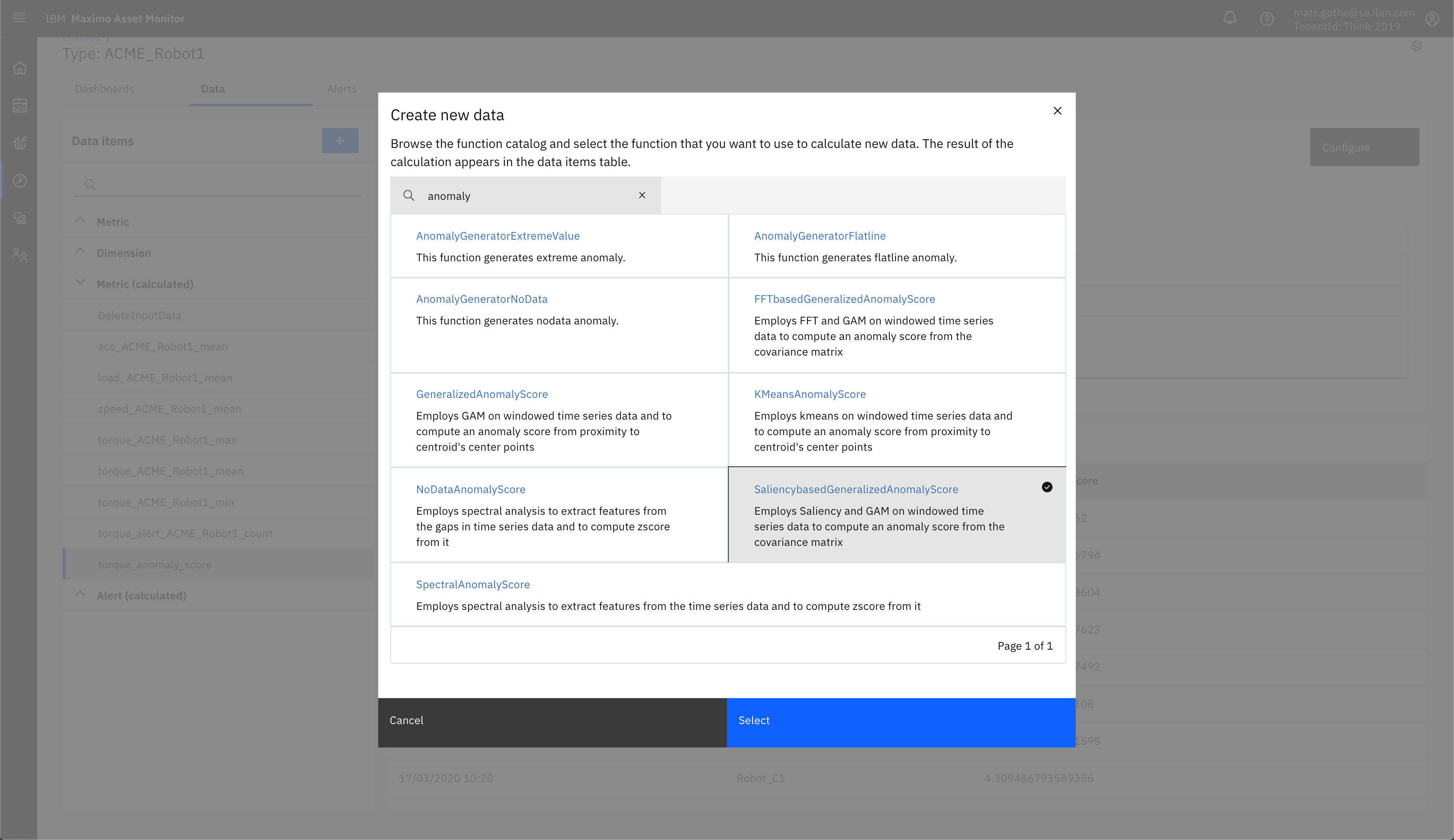 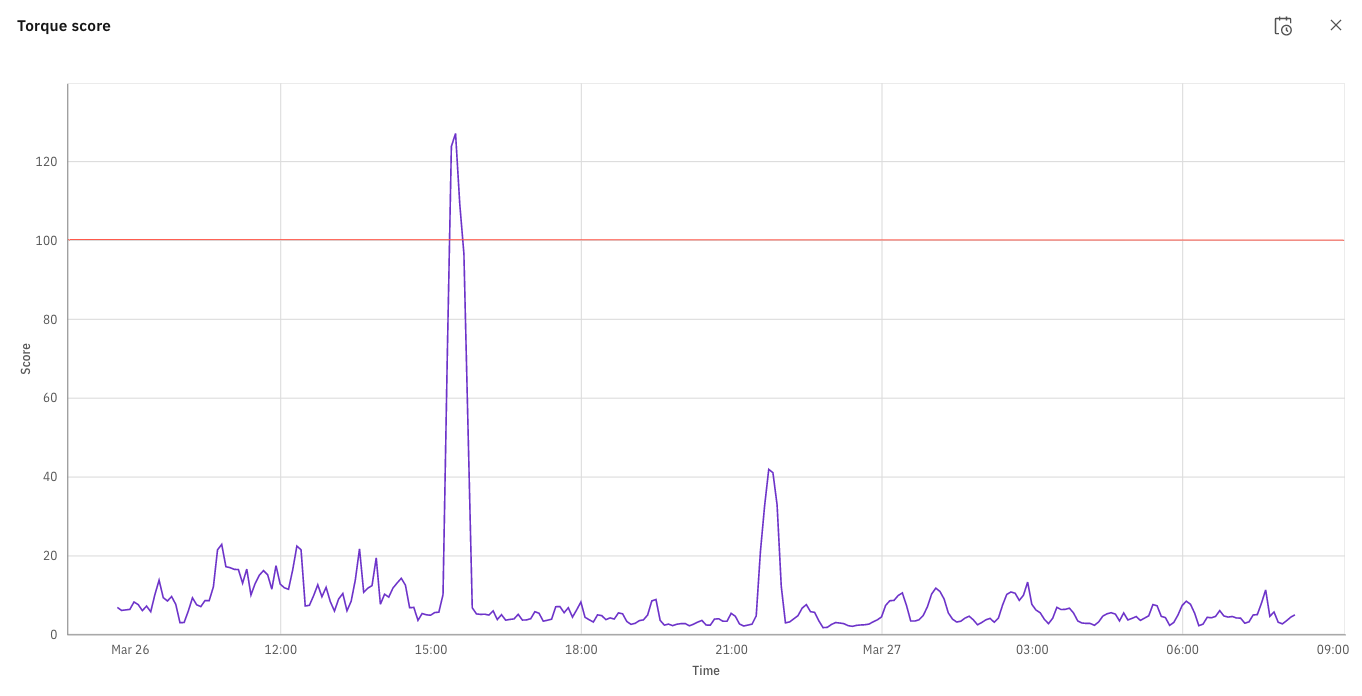 A Summary Dashboard is a dashboard-type that presents aggregated KPIs and provides drill-in to aggregated metrics using hierarchical filters. Let’s decompose that statement a bit. For the operators at ACME, the Robot Summary Dashboard presents an overview of KPIs across all ACME sites. And it allows a drill-in to a selected site, a selected line, and a selected robot. Robot data, resulting from the selected filter, is aggregated and presented as statistical units. For example, maximum, minimum, and mean values across all robots passing the filter. Data is also aggregated across a time grain. For example by the hour, by day, by week, by month. This allows the KPIs to be tracked and compared over various levels of the organization and at shorter or longer time ranges. A screenshot of the Robot Summary Dashboard is given below. The screen shows filtering the KPIs of the robots to an hourly report of the Alphaville manufacturing site. 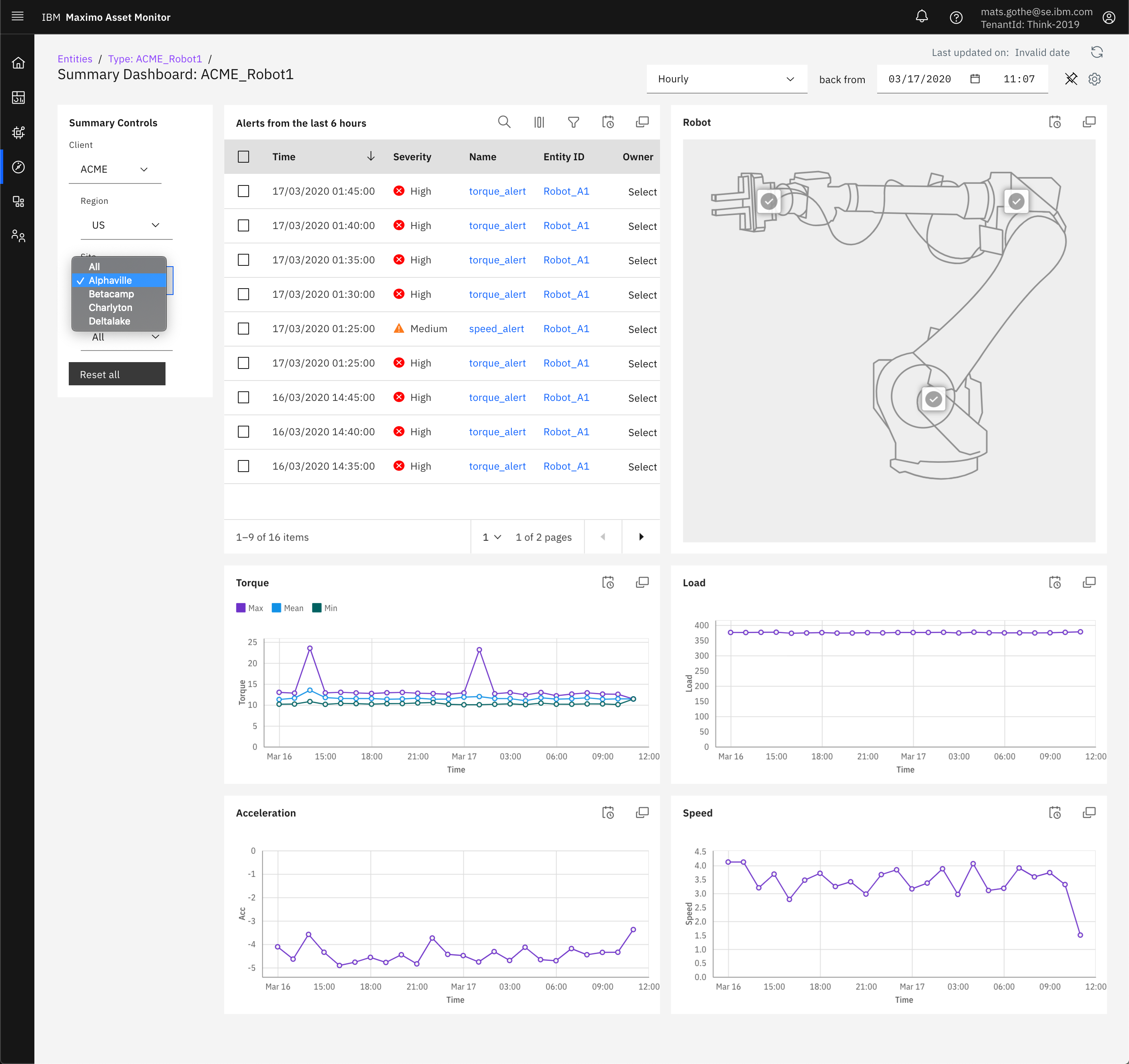 An Entity Dashboard is a dashboard that presents the operational metrics of a single entity. In this scenario a single robot. Metrics from a single entity can be presented without any aggregation and in near real-time. Robot metric values and anomaly alerts are presented on values cards, tables, and graphs on the dashboard. The Robot Entity Dashboard for one of the robots at Alphaville is shown below.

Operators approach the task of monitoring by identifying and prioritizing alerts on the Alerts page, or by identifying ‘assets in trouble’ using Summary Dashboards.

Maximo Asset Monitor provides an Alerts page that summarizes all alerts across all types and entities in the system. An ACME operator may filter the Alerts to identify the most critical alerts on the most critical assets and start the root cause analysis by following the link on the alert to the entity raising the alert. An example of the Robot Alert Page for the ACME robots is presented below.

As shown on the screens above, alert tables may also be included on summary dashboards and entity dashboards.

Alerts page in Maximo Asset Monitor providing a tabular view of all alerts from monitored asses in a system.

Operators validate alerts and troubleshoot the root cause of the anomalous data by inspecting the short and long-term asset behavior using historical metric data using the time range picker on the dashboards. Once the anomaly is validated and the root cause is identified, operators will create a service request for maintenance supervisors to plan the work order for maintenance engineers to resolve the issue.

As shown on the screens above, a service request may be created including reference information of the asset id, job code, and links to the alert in Maximo Asset Monitor. 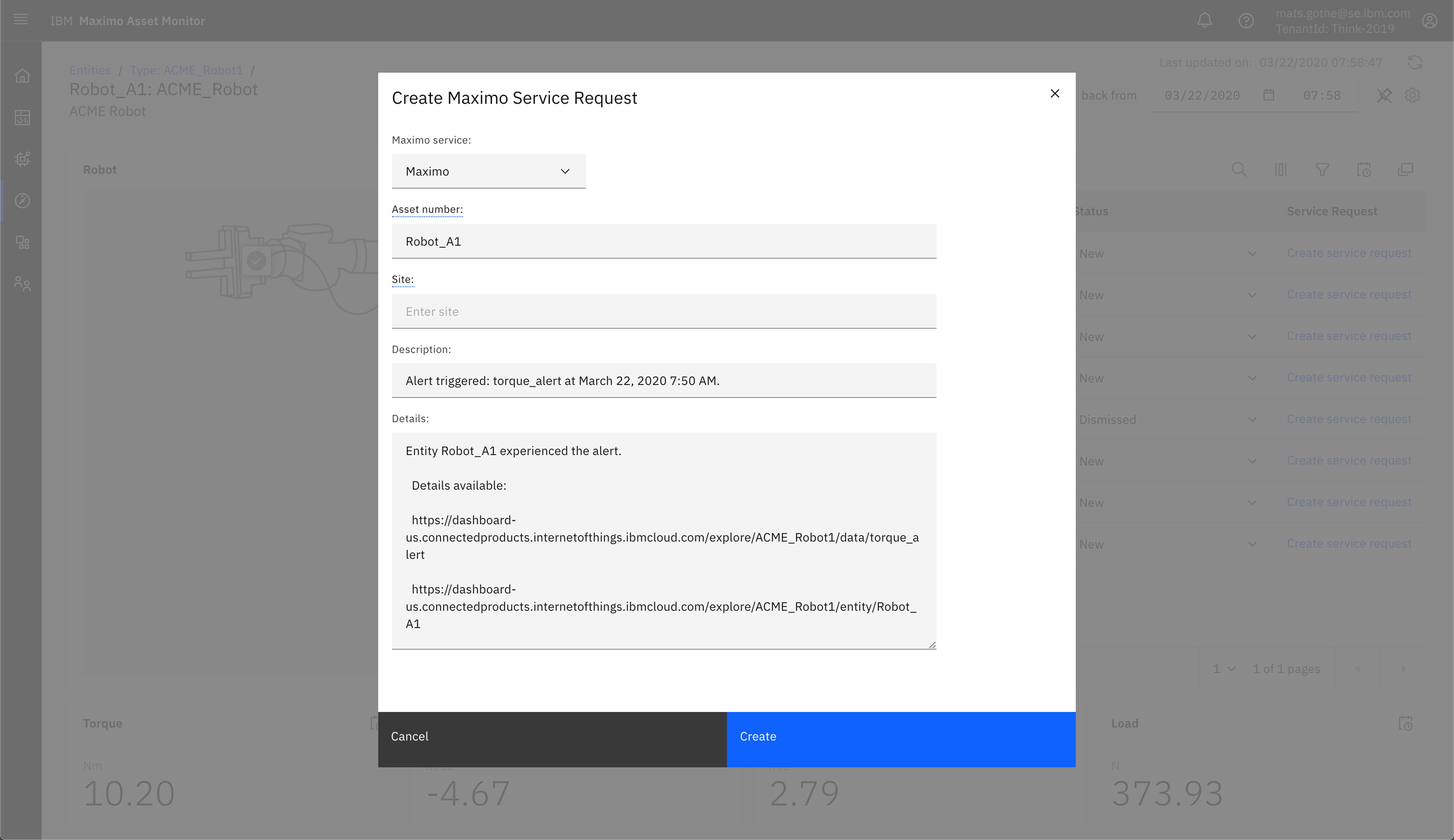 Creating a new service request from an alert in Maximo Asset Monitor.

Explore the steps to configure the dashboards for ACME robots in the Hands-on Lab Mastering Dashboards in Maximo Asset Monitor. In the lab, you will start by exploring more in detail the sources of robot data that you will monitor. You will then learn the steps of configuring an operational dashboard for monitoring the metrics, trends, and anomaly alerts from the ACME robots. You will use the monitor dashboard presentation techniques of value cards, graph cards, table cards, and image cards with hot spots. You will also explore summary dashboards that provide data aggregation and filtering to monitor your performance KPIs.

Hands on Lab for a practical introduction to the use of dashboards in IBM Maximo Asset Monitor.

Hands on Lab for a practical introduction to the use of dashboards in IBM Maximo Asset Monitor.