In 2017 I delivered the design for an IoT Security Heartbeat iPad Application demonstrating how existing IBM products in the IoT and Security portfolios are providing better insights and responses to security threats.

The CISO, or CSO, is directly responsible for risk, compliance, securing and protecting the assets of the business—including employees, data, IT infrastructure and information, plants and customers B2C and B2B managed and unmanaged IoT devices 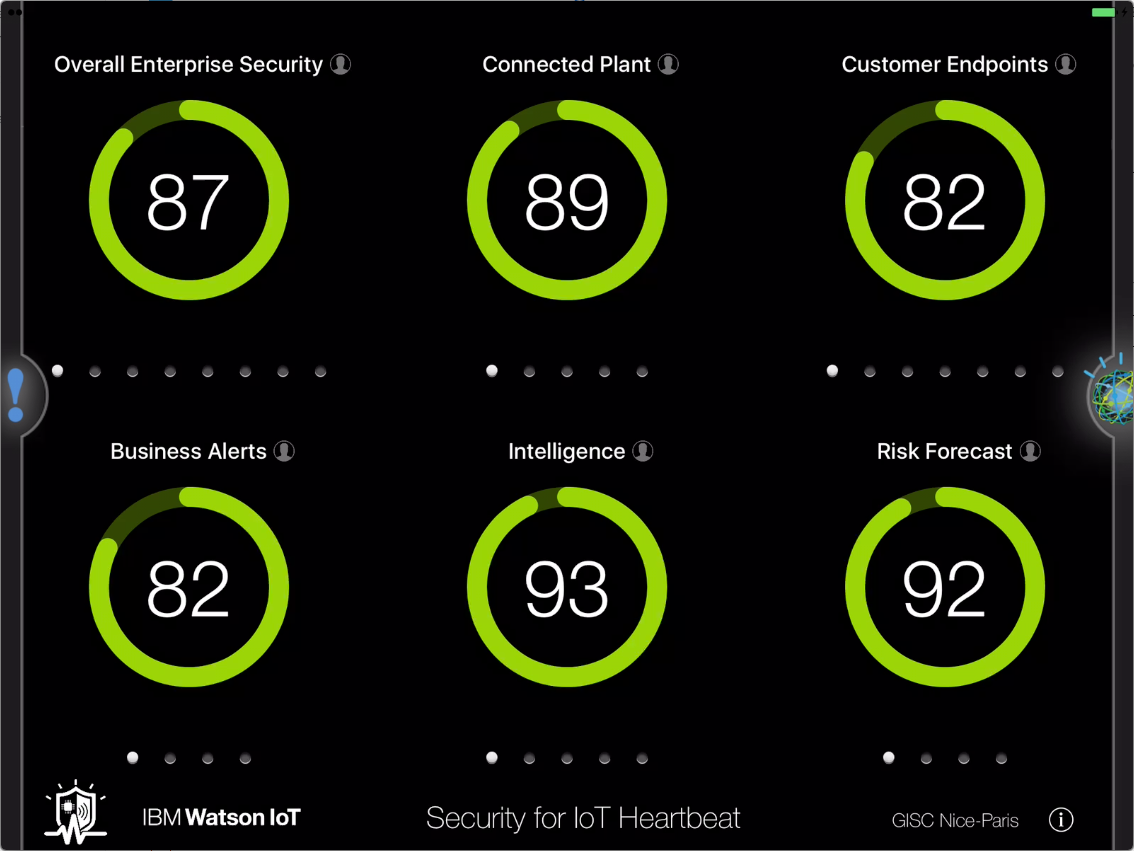 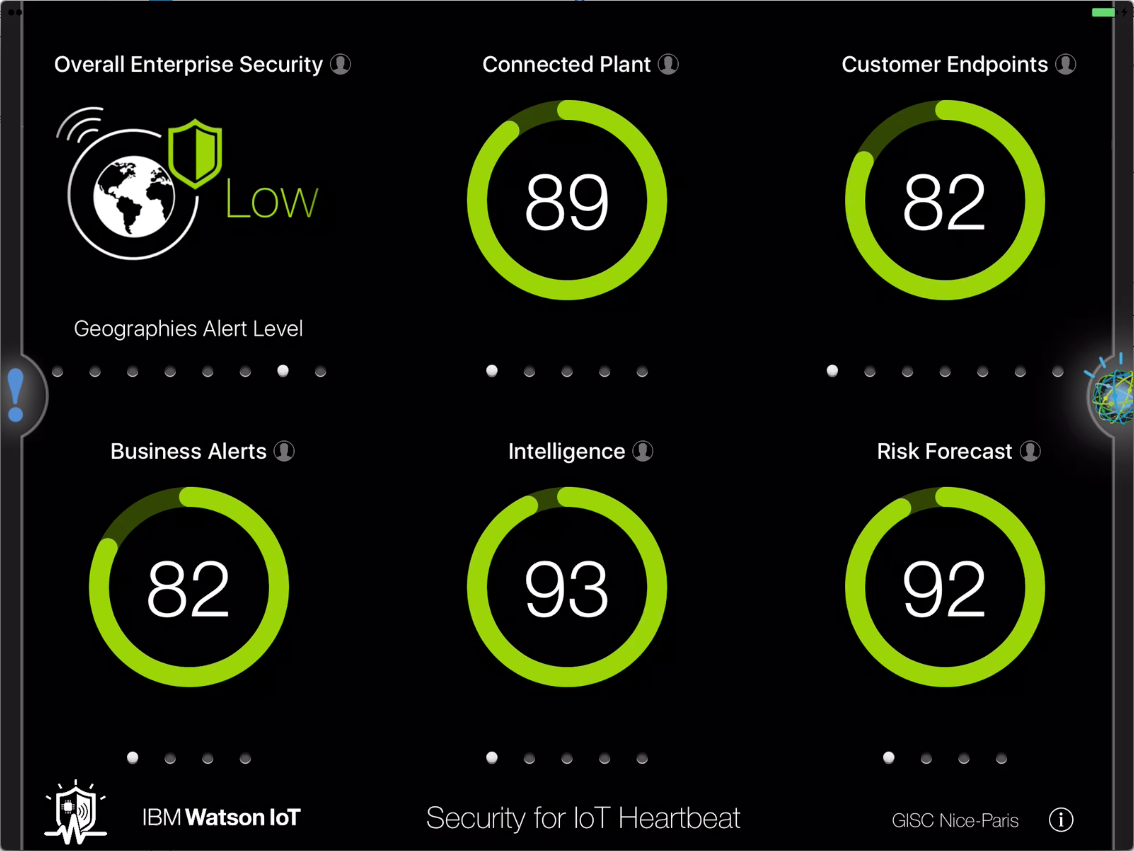 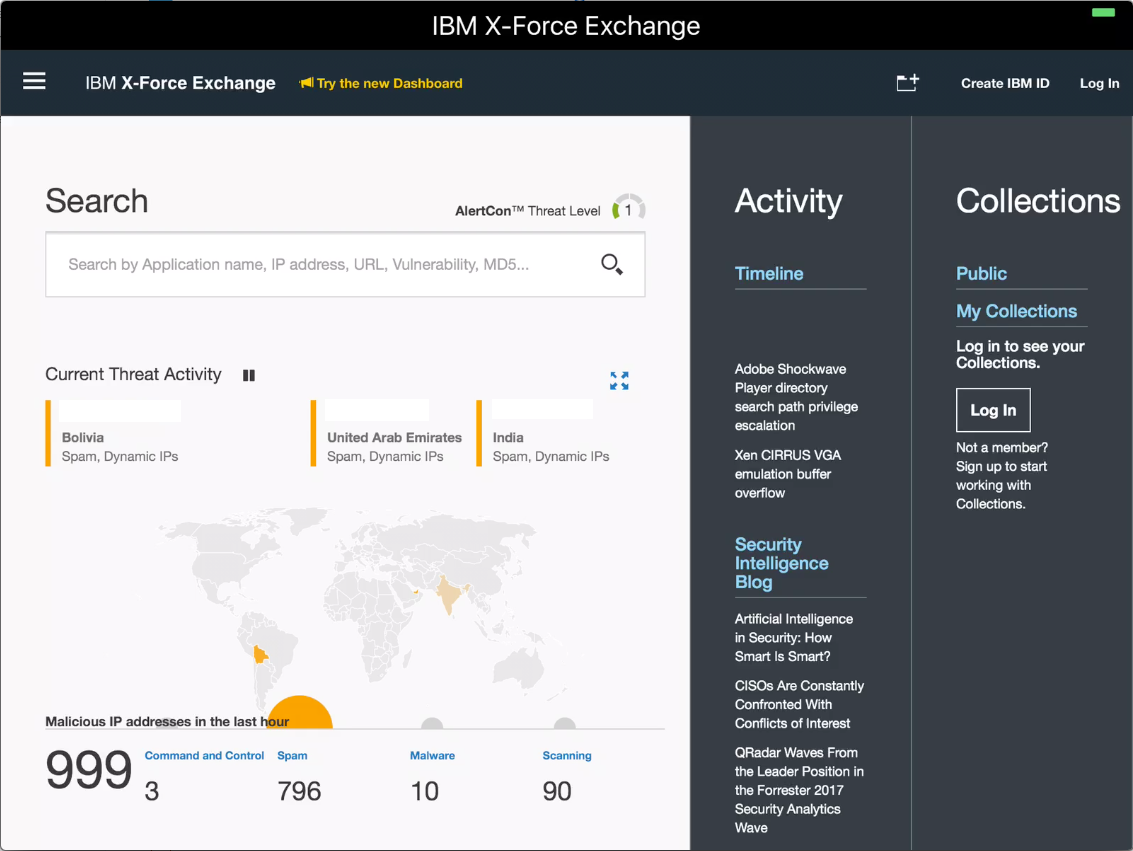 There has been a fire that caused damage to the manufacturing facility at Globex Inc. The fire centered around an exit door. Upon further investigation, it was clear that the source of the fire was an electric motor used to automate the security shutters on the door. Fortunately, nobody was harmed and the fire was contained, but the consequences could have been grave.

There are serious safety concerns in relation to risk to human life, as well as the potential negative impact to the reputation of, Globex Inc;, the manufacturing facility and the reputation of the brand for Oscorp Inc, the OEM company, supplying the faulty electric motor. 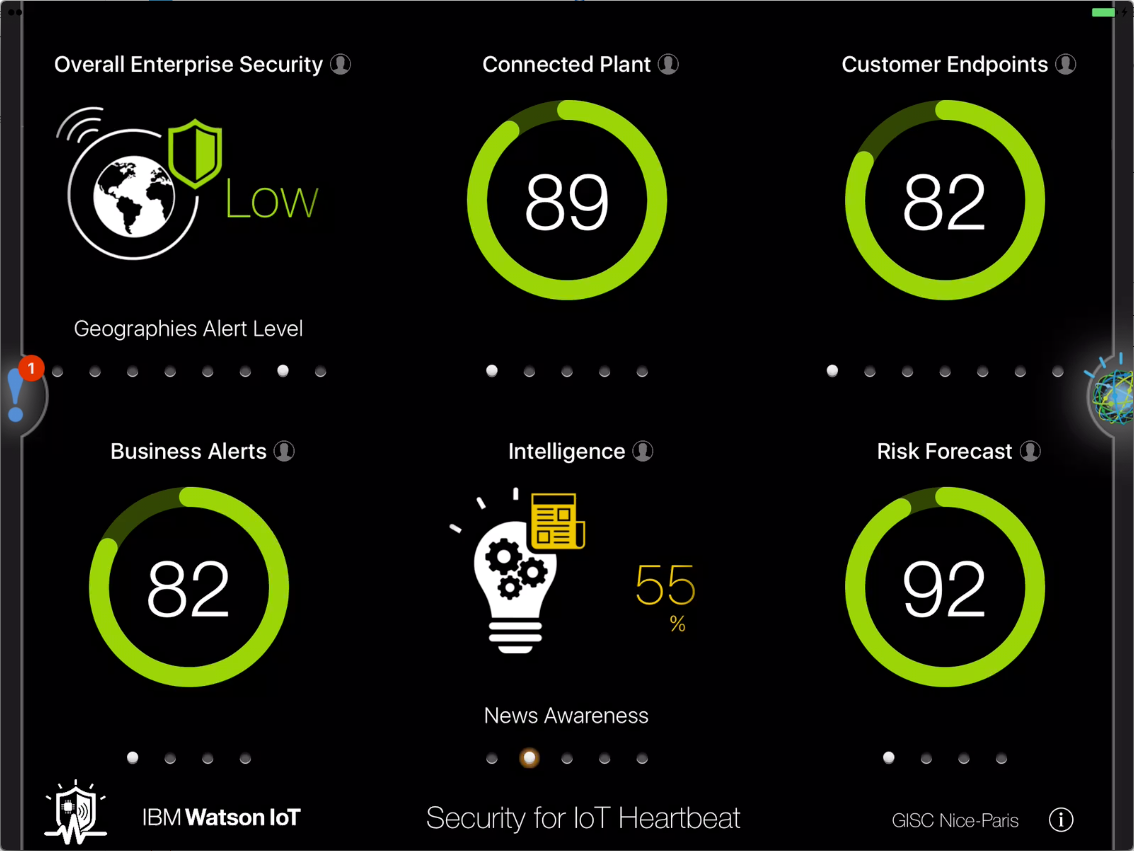 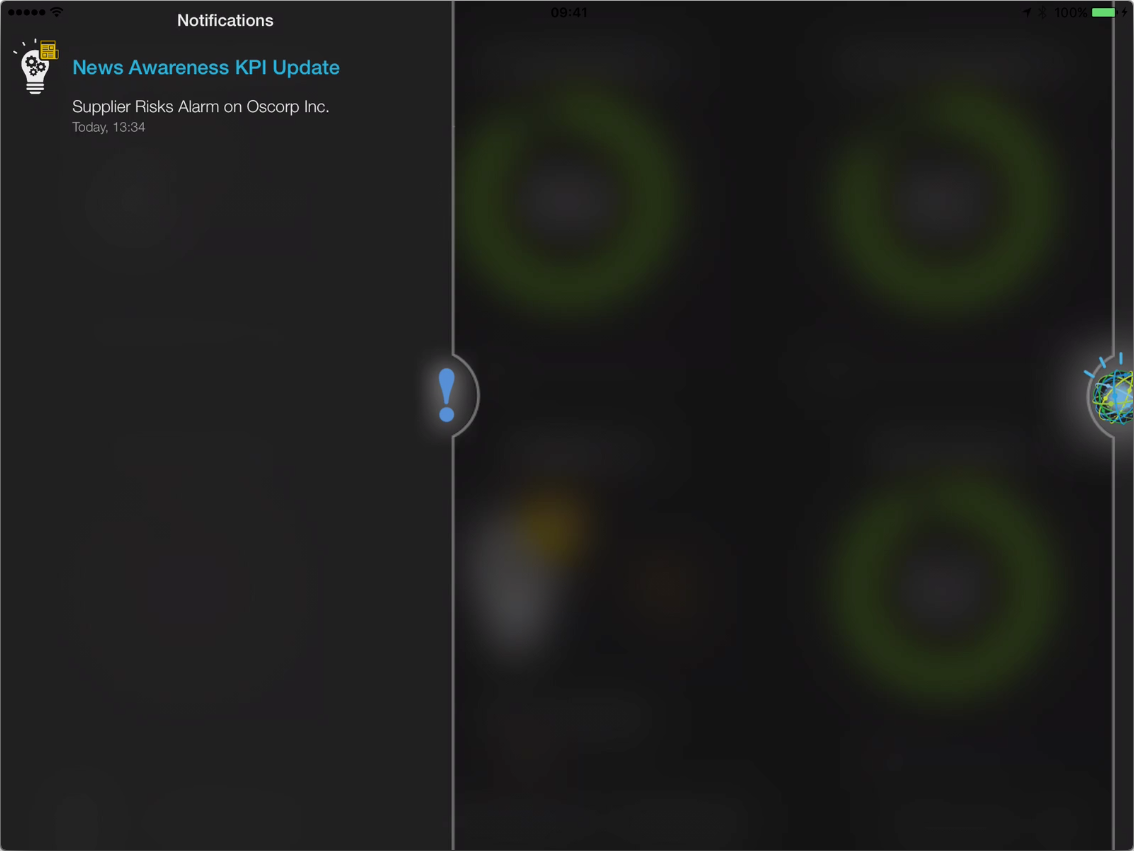 The Intelligence domain  and Suppliers Software Updates KPI becomes Amber indicating a warning that some of our devices needs to be updated (FW). 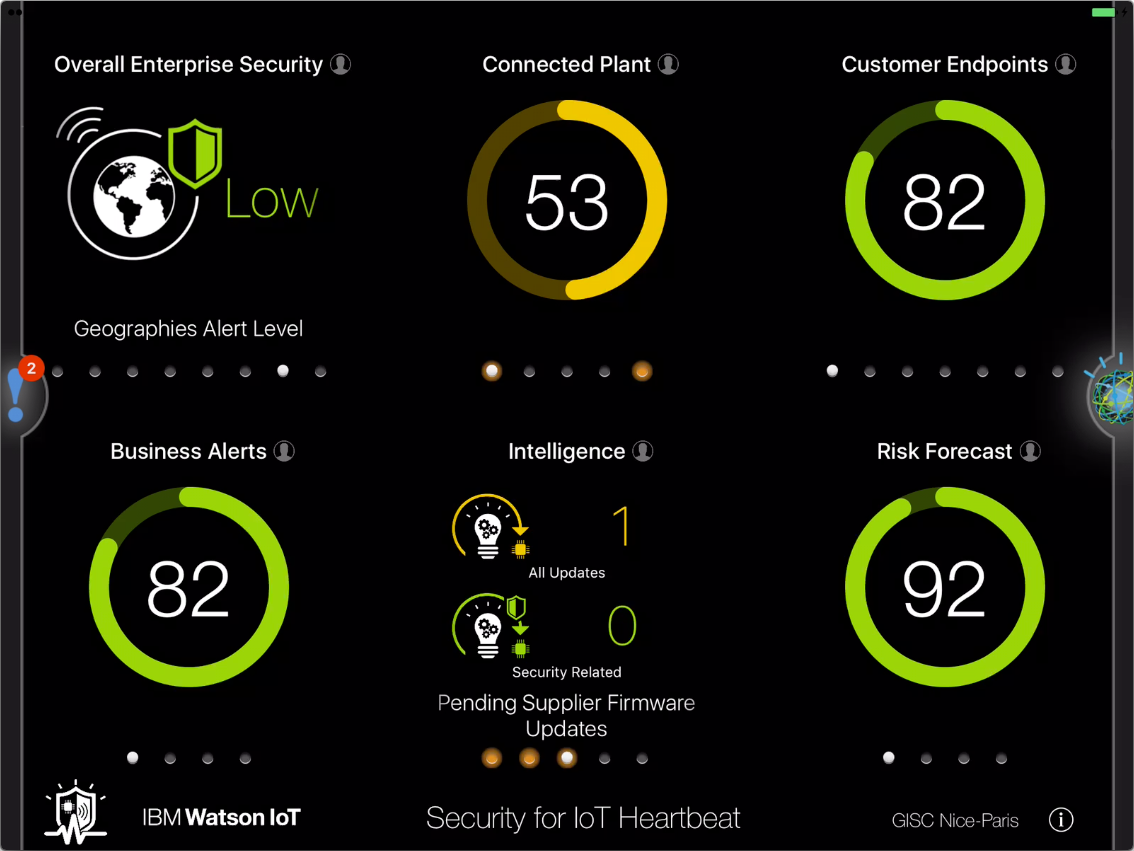 Scene 3 – High level of Attacks/Threats on our Oscorp devices

The debugging code left in the device opened up a security hole allowing the possibility of remote commands to be sent to the device outside of safe operating ranges.  The IP addresses had been detected in relation to unauthorized access to other critical computing resources. In some instances devices were ‘cloned’ and malicious connections were attempted from those cloned devices to skew IoT data readings. 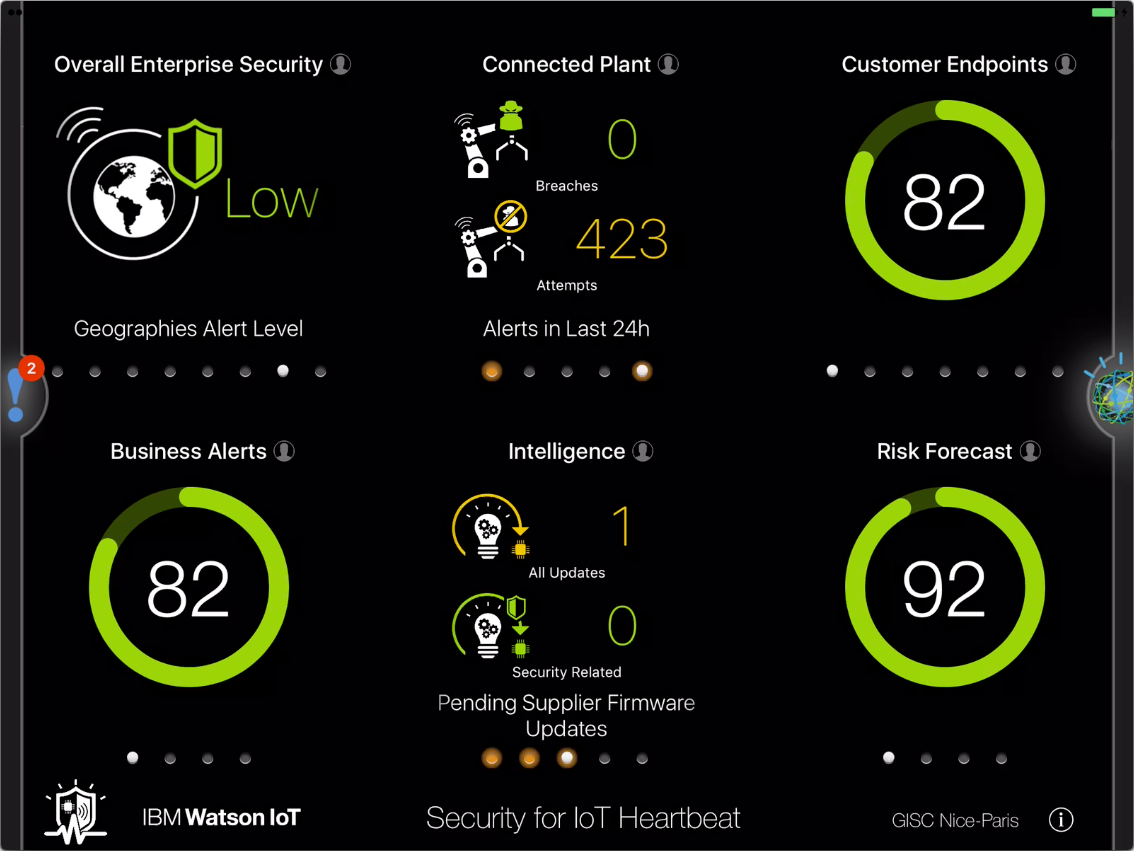 The Business Impact domain and Incident in Production Floor becomes amber because of current attacks on Oscorp. Devices may have a huge impact on our production planning. 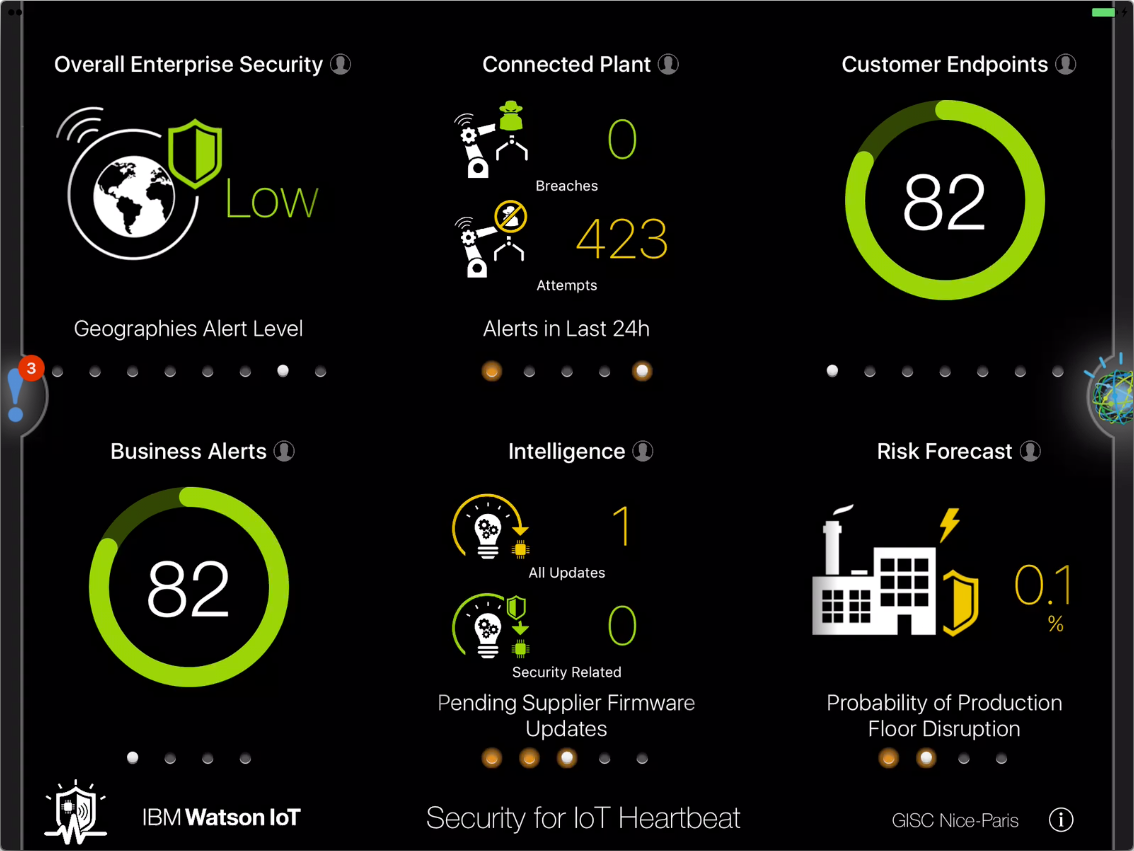 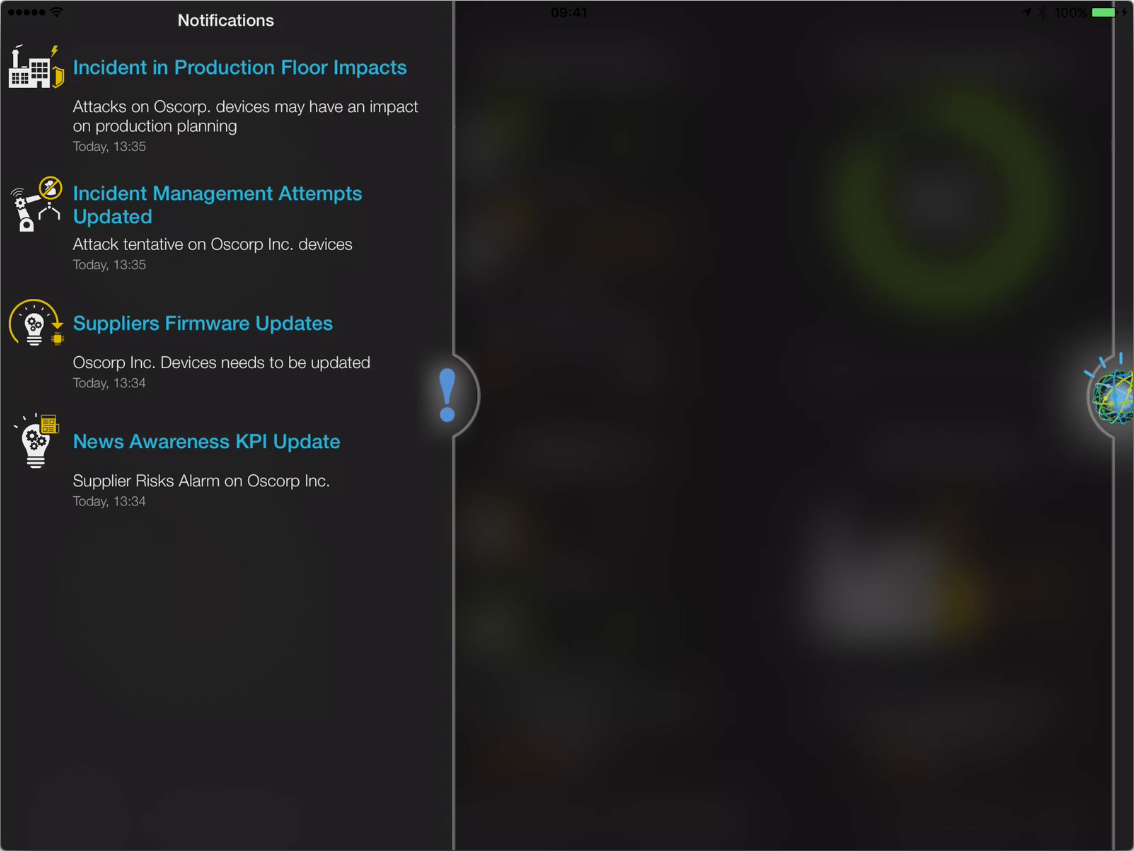 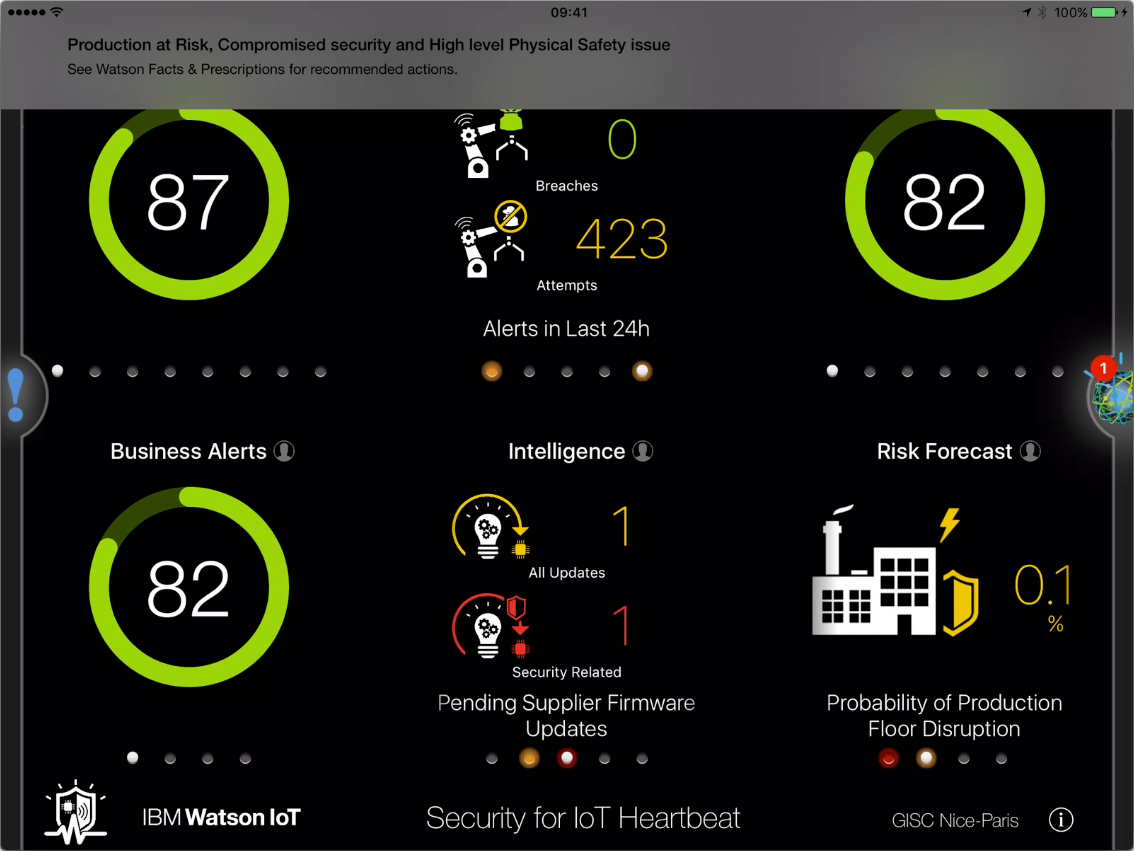 ACME is choosing the Cost Optimisation route and schedules device FW updates based on a need scheduled update cycle. It minimises the impact win business and any demands for production downtime. By choosing this route, relevant people in the ACME organization are notified of the conditions and plan. 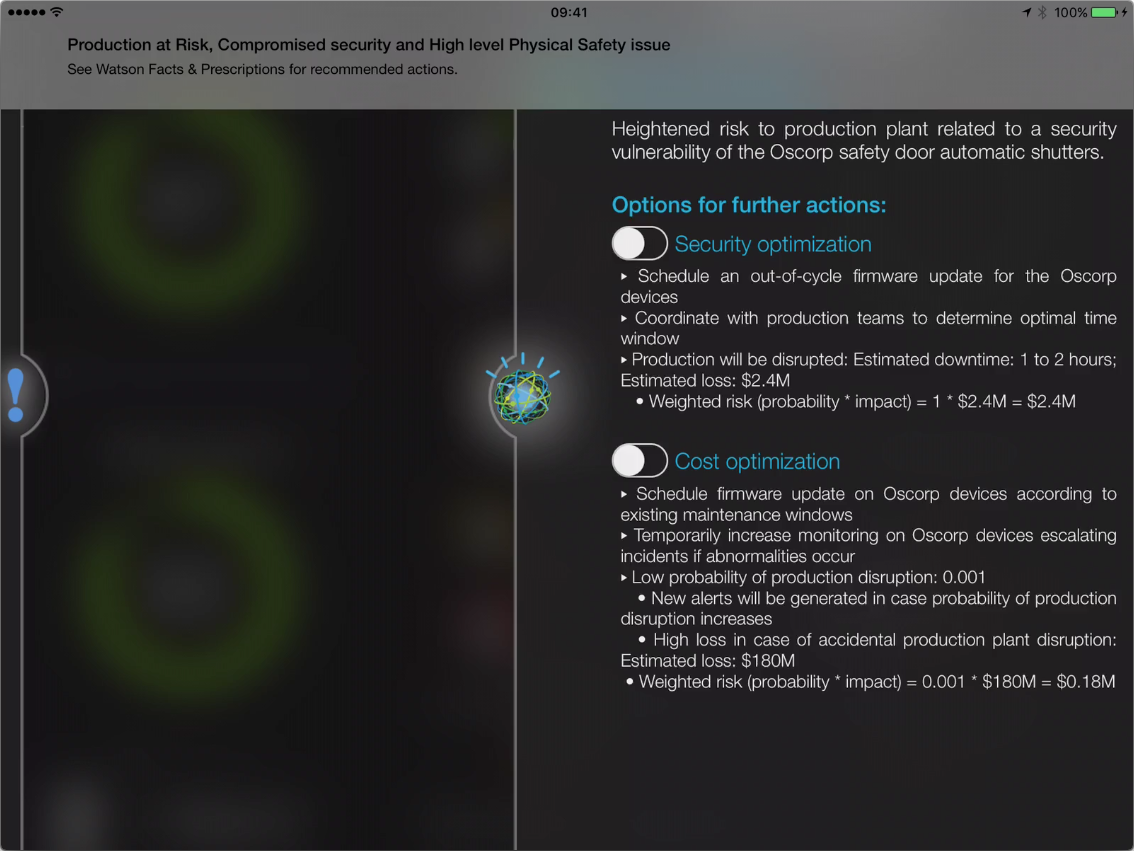 The Intelligence domain and News Awareness becomes amber because clients satisfaction is dropping and Sentiment Analysis in Social Media is indicating product, security or vulnerability issues. These early indicators may not yet show in corporate support channels. 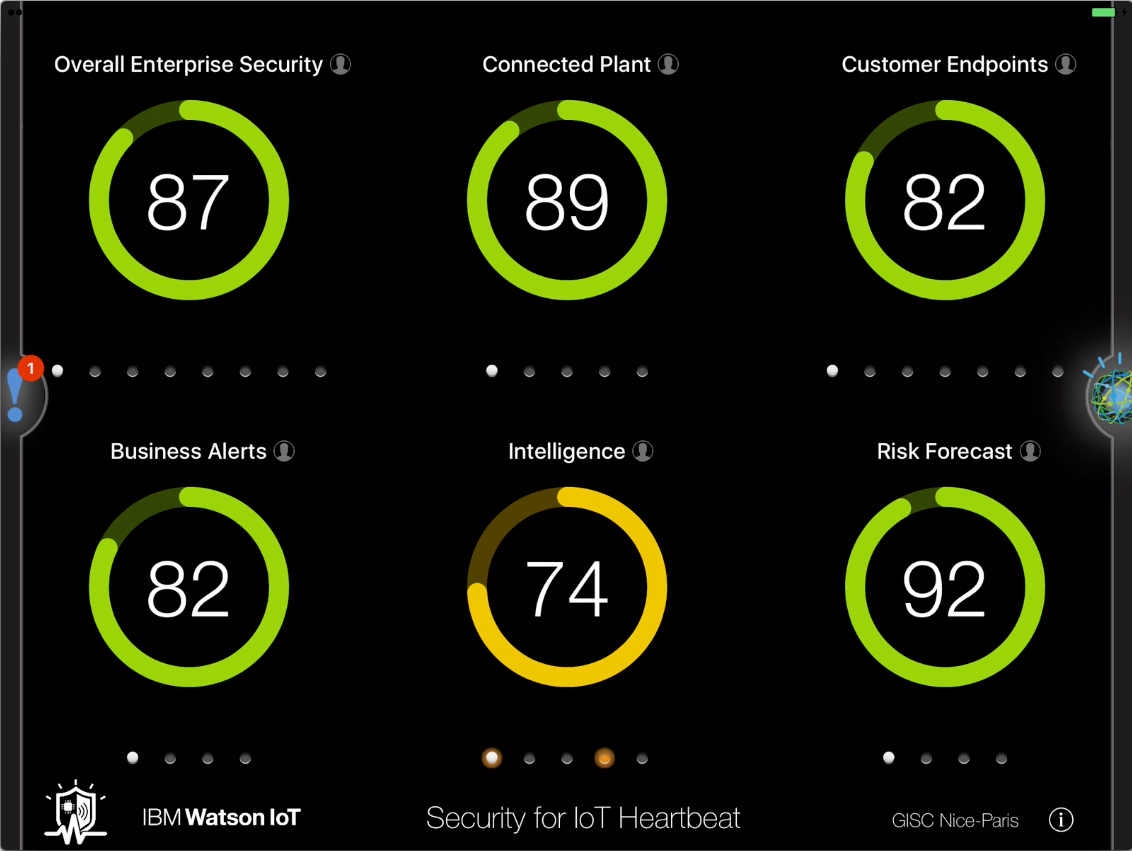 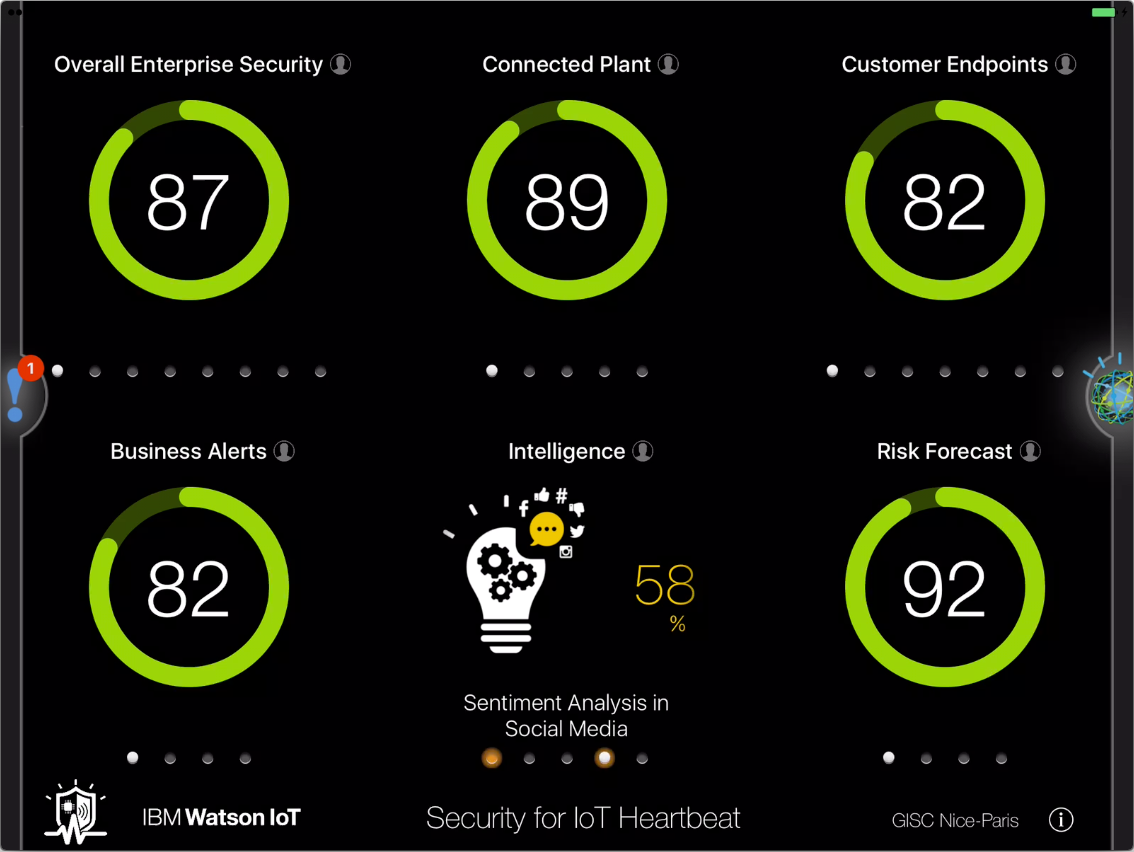 The Business Alerts and Variation in Client Support Requests becomes amber because because the increase in client support requests on product malfunctions. This is impacting the ACME operational cost but also indicating a risk to client operations. 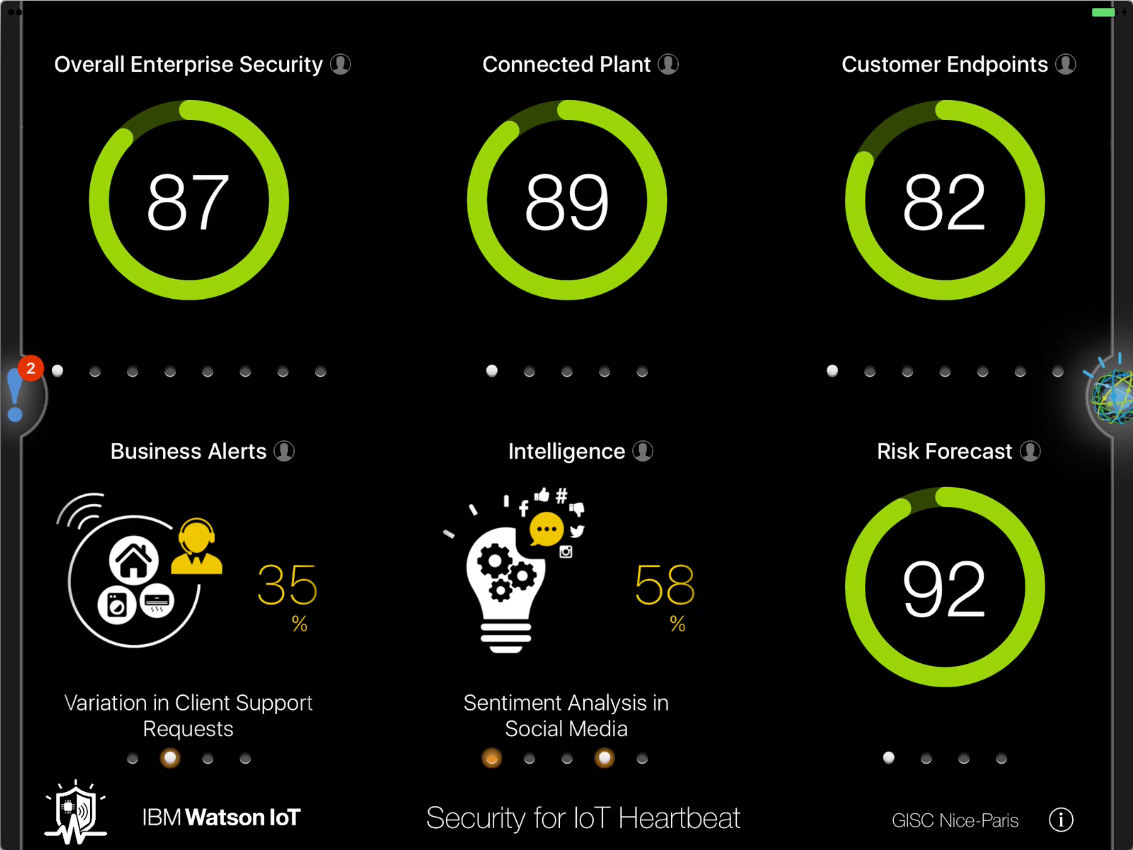 Scene 8 – Customer Endpoints
The Customer Endpoints and Policy Compliance Score becomes amber because the Enterprise Assets KPI is dropping. Drilling into the data source of Device Security Policies in the Watson IoT Platform we see that a significant number of devices are failing to authenticate. This suggests that there is an issue. 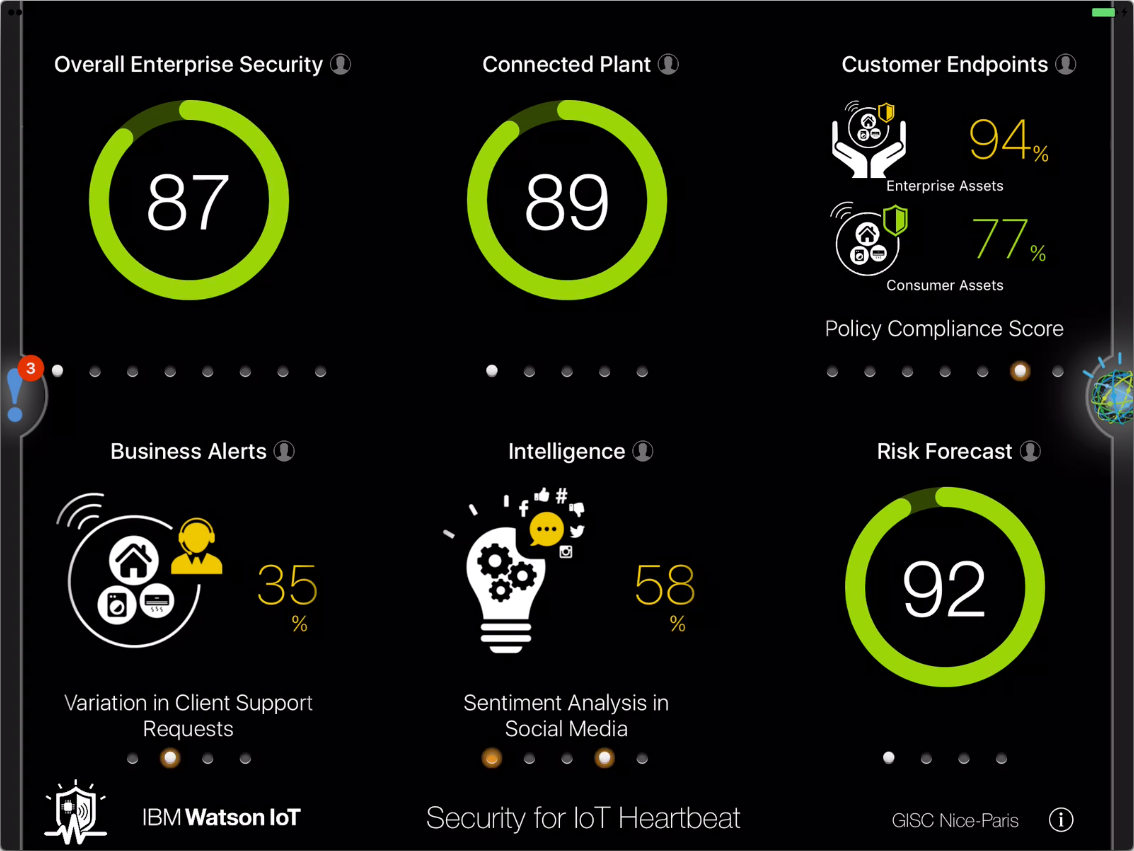 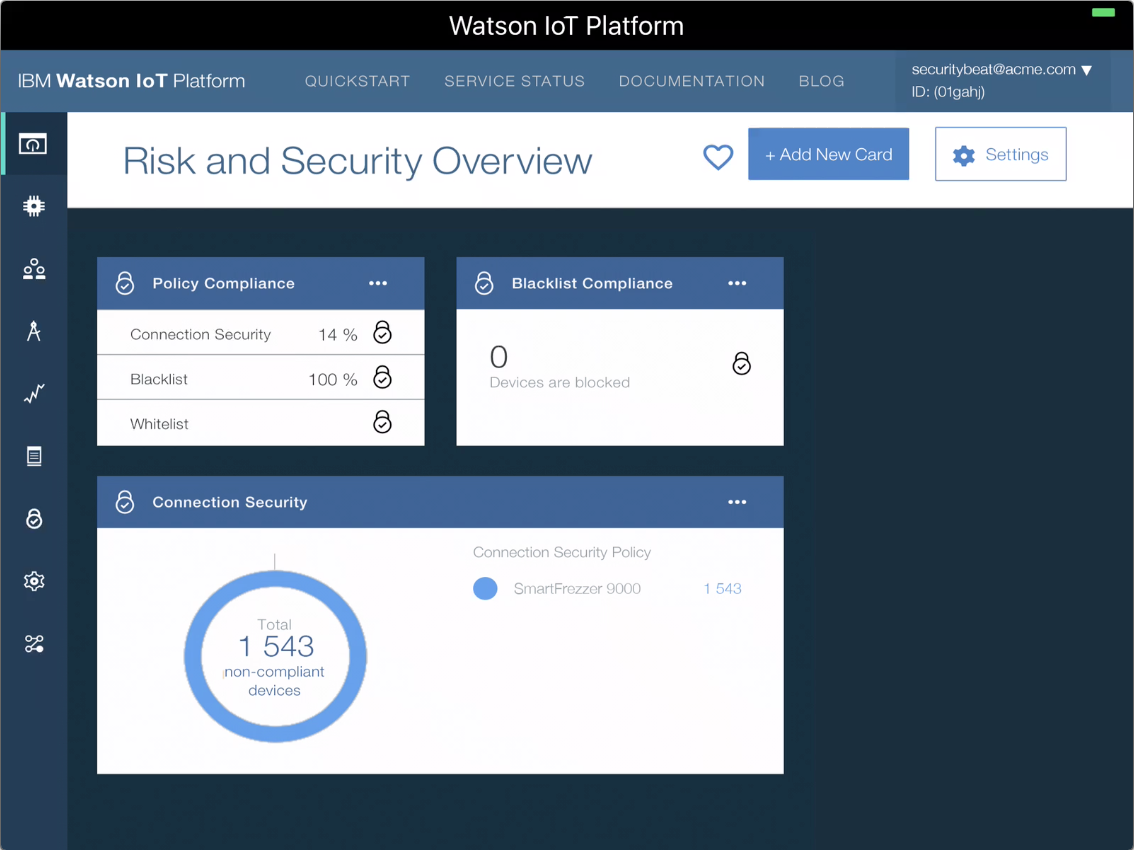 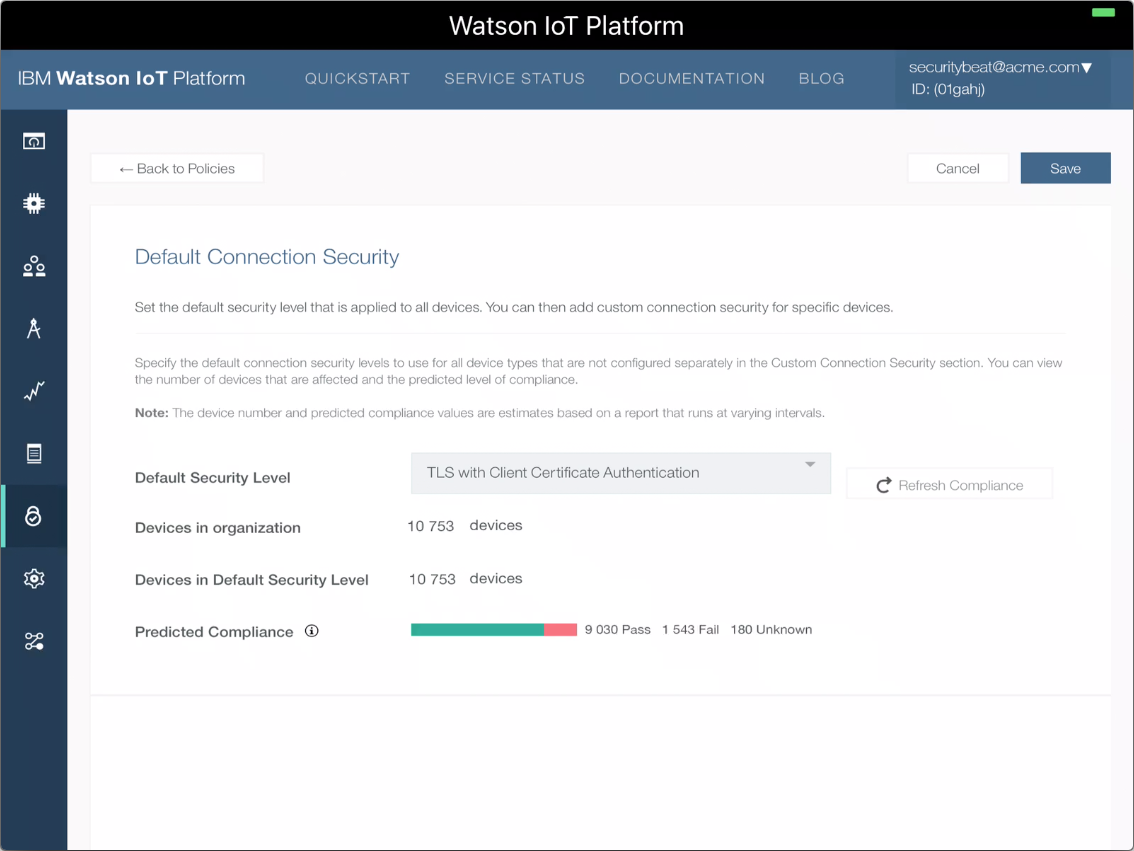 Watson issues an Alert on the condition. 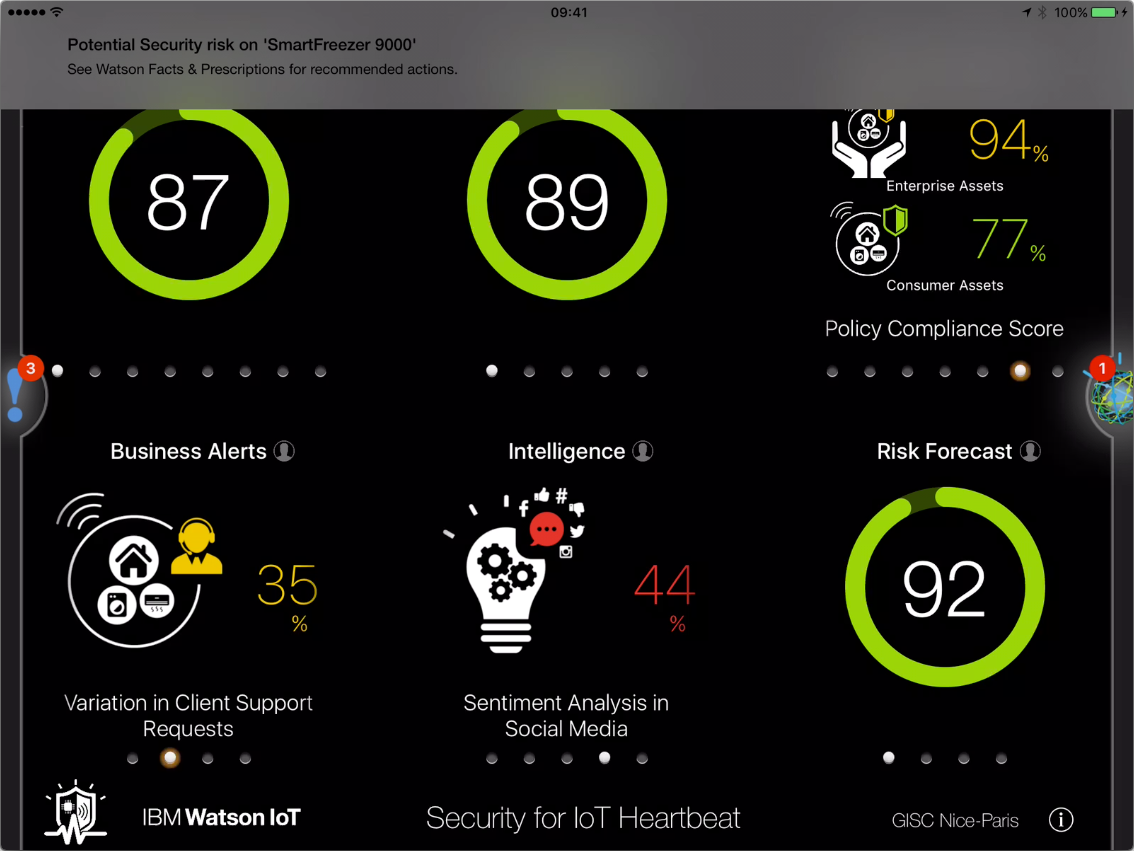 To the left, notifications on Compliance, Customer, and Social Media KPIs.
To the right, prescriptions from Watson on the root cause and suggestions on further actions 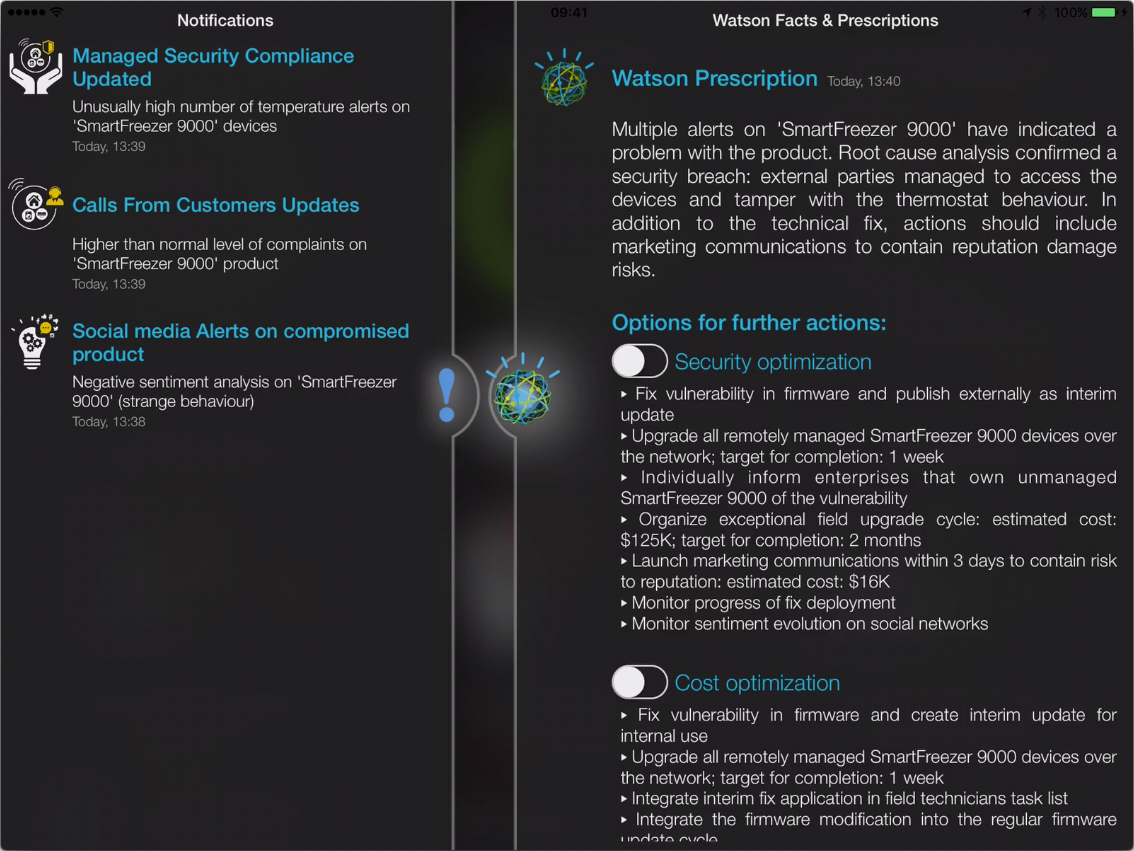 “Ninety-four percent of CxOs believe it is probable their companies will experience a significant cybersecurity incident in the next two years.”

“An effective tactic to combat cybercrime is transparency and collaboration, sharing incident information internally and externally. Improve awareness and drive a more risk-aware culture across the entire organization.”